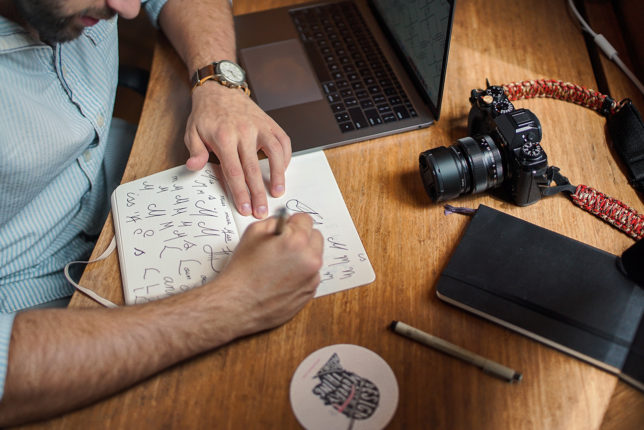 It’s Time to Get Creative About Your Health Insurance

As an artist, writer, photographer or other creative professional, you may love the freedom you have working for yourself and building a solid portfolio. But as a freelancer, you already deal with unpredictable income, which can make it difficult to budget properly. Unfortunately, the fact that you don’t work for someone else does not eliminate the federal requirement that you have health insurance. Failure to have insurance could result in an IRS fine. In 2017, the penalty is the greater of two options: 2.5 percent of your household’s taxable income, or $695 per uninsured adult and $347.50 per uninsured child in your home.

It might not seem like much, but penalty fees can add up, especially when your paycheck isn’t guaranteed. But major medical insurance can be even more expensive, with high monthly premiums and outlandish deductibles. So how do you get some coverage in place to avoid bills from surprise medical fiascos? You get creative.

Barriers to Health Insurance for Creatives

Overall, the Affordable Care Act (ACA) has made it easier for artistic people to obtain health insurance, but there are still some barriers to obtaining insurance if you work independently. A survey conducted by the Future of Music Coalition and the Artists Health Insurance Resource Center found that 43 percent of artists polled did not have health insurance in 2013, more than double the uninsured rate in the general population at the time. The main reason many artists reported they did not have insurance was because it was too expensive.

Creative people typically work alone, unlike other independent contractors who may work in collective settings, such as hairdressers or tattoo artists. Because they work individually, it means they may not be eligible for group coverage by pooling resources like other self-employed workers do. Despite these barriers, there are ways for artists who are working as freelancers to obtain health insurance.

Short-term health plans, as the name suggests, are meant to bridge a gap between temporary losses of health insurance. But more people are finding that short term health insurance can be a good – if limited – option, especially if you’re single or don’t use many medical services in a year. The primary selling point on temporary policies is that they’re cheap. In 2016, the average cost of a short-term policy for individuals was $110 a month according to a report by eHealth. Families paid an average of about $276 a month. The average for major medical coverage for an individual in 2016 was $321, which is nearly three times higher than short term coverage. (The average for individual 2017 major medical insurance was $393 a month.)

In 2016, a final rule was issued by the Obama administration that required short-term plans to be capped at three months. Beforehand, you could find plans that lasted up to 364 days in some areas. Although renewals are still permitted, insurers can deny the request, something they’re more likely to do if you get sick or get diagnosed with a medical problem.

In addition, short term healthcare policies do not meet the criteria set forth by the ACA that qualifies as health insurance. This means you would still face the IRS penalty at the end of the year if all you had was short term coverage.

There are a few glaring downsides to temporary policies. Short-term health plans provide coverage for a limited time and usually don’t include comprehensive coverage. They may not cover maternity care, pre-existing conditions or prescriptions. Many have coverage limits that may be applied annually or for your lifetime, and the insurer is not required to renew the policy at the end of the term. Know what you’re signing up for when you buy short-term health insurance. They aren’t perfect, but they can keep your medical costs down in a pinch if you don’t have anything else in place.

Short term plans don’t always come with all of the benefits that a person needs, especially if there’s a higher deductible to satisfy, which is partly why they’re so inexpensive, but you can bulk up a temporary health plan with ancillary products. These include standalone prescription drug coverage, dental and vision benefits, or accident and critical illness policies. Ancillary benefits, which is the name given to a fairly broad range of non-major medical products that can be purchased separately from major medical plans, allow you to build a health plan that addresses your needs.

Keep in mind that the more you add to your benefits bundle, the higher the monthly premium will be. Fortunately, most ancillary products are affordable. Also note that bundling these products together will not keep you from having to pay the IRS penalty for not having major medical coverage. But even with that fee, you may come out ahead by combining ancillary products with short term coverage if your medical needs are low.

Some creative and entertainment industries, like music and acting, offer union-based health insurance that may be an option for you. Unions like SAG-AFTRA or the Graphic Artists Guild, whose focus is the artistic community, offer benefits to working artists for less than you might pay in the private market. For example, SAG-AFTRA, which represents singers, actors, voice-over artists and others in the entertainment industry, offers comprehensive health benefits packages that include medical, prescription drug, dental, vision and mental health coverage. Premiums range from $300 per quarter for an individual for the lowest-level plan to $456 per quarter for an individual with the highest-level plan. Family and senior plans are also available. There are a wide range of unions available for almost every type of creative enterprise. It is important to note that some unions, including SAG-AFTRA, have requirements that must be met before members can qualify for health insurance.

Creative types can also find insurance through the Obamacare marketplaces, either through a state-based exchange if your state has one or the federal site at HealthCare.gov. Through the exchange, you may find that you qualify for subsidies, which give you a discount on your premiums based on your income. As a freelancer, your income may qualify you for a reduced premium. Keep tabs on the deductible, which is the amount you’ll have to pay before your insurance starts paying its portion, and the copayment or coinsurance amounts, which are the fees you’ll pay out of pocket for doctor visits, prescriptions and other medical services. The higher your deductibles and co-payments, the lower your premiums will be, and vice versa.

In 31 states and the District of Columbia, Medicaid was expanded under the Affordable Care Act, allowing more people than ever to qualify for the program. If your income falls below 133 percent of the federal poverty level, then you may qualify for the joint federal and state program. Even in states where the program was not expanded, you may qualify based on your household size, income, family status and other factors. If your income is low, consider Medicaid as an option, especially if you are pregnant, have children or are disabled.

Artists face unique challenges when it comes to acquiring health insurance. Unlike other independent contractors, creative freelancers are often not tied to what may be considered a traditional job. They may work odd hours and often work alone, so they do not qualify for group health insurance. Despite these challenges, it is possible to build a health plan that works for you. Explore your options for free online ›