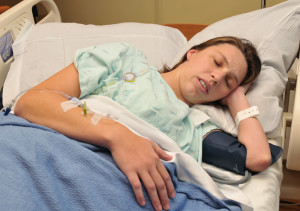 If you have ever stayed in hospital for more than one night you likely know what people often say after they’ve come home, “Thank goodness I’m home, now I can get some rest!” The constant barrage of nighttime interruptions often leaves patients exhausted from lack of sleep, but this may be changing at a hospital near you.

This patient-centered initiative in the Obamacare law has quickly led hospital administrators to begin assessing what they can do to eliminate these penalties and increase their patient approval ratings and lower their readmission rates. One of the chief complaints that patient’s state is that they become frustrated by being woken up every hour for one thing or another all night long. When hospital administrators are seeking to boost their approval scores this particular concern of patient’s is glaringly obvious as an easy fix that could surely lead to better patient approval ratings and most likely fewer readmissions.

Changes Would Make a Big Impact For Patients

Before the law went into effect hospitals have always scheduled patient care around the healthcare professional’s needs rather than the patients, meaning that traditionally hospitals schedule a variety of night duties to accommodate the hospital staff, typically aligning them with shift changes and taking patient vitals so they will be there when the treating physician makes his early morning rounds. Between blood draws, administering medications, vital signs and other various procedures patients are being woken nearly every hour whether their condition merits frequent check-ins or not. And though there are few studies specifically examining patient sleep amounts with patient outcomes it’s just common sense to know if patients are getting the proper sleep they need they will be better prepared to heal and more apt to get better faster.

Although there is no mandate on hospitals nationwide to change their nighttime care strategies, it is believed they will make these changes voluntarily in order to meet the 2010 healthcare law approval scores. As hospitals seek to avoid penalties for low patient approval scores changing nighttime care to be more patient-centered is seen as one focus that makes sense. Experts in the field agree, “There’s a movement toward patient-centered care, and this is definitely a part of it,” said assistant professor of Harvard Medical School, Melissa Bartick.

Hospitals Are Getting Creative to Solve the Problem

Chief experience officer Richard Evans, at Boston-based Massachusetts General Hospital agrees that the focus makes sense, particularly when a portion of the federal patient approval survey is directed specifically at nighttime noise levels. Massachusetts General has since instituted quiet hours for a few hours during the day and six to eight hours at night, depending on the level of care the patient requires. Lights are also dimmed and staff is asked to keep the noise levels low on the floor. Staff is also asked to consider whether patients actually require a particular care during the night before disturbing the patients sleep. Richard Evans said, “We’re trying to increase awareness that patients need to rest, and we need to structure care as much as possible to allow that to happen.”

Some hospitals are taking initiatives even further by adding holistic approaches too, by offering aroma therapy at night, lavender oil can be spritzed in the room if the patient would like and they are offered a cup of sleepy time relaxing herbal tea before bedtime. And though these initiatives and reducing noisy equipment or staff chatter at night may help, according to patient approval survey questions it’s not the noise that’s bothering them, it’s the constant nighttime care interruptions that patients are most frustrated with.

According to a 2013 study published by JAMA Internal Medicine approximately fifty percent of patients being woken in the night to check their vital signs are unnecessary. The study also indicates that there can be serious consequences to disrupting patient’s sleep that may lead to unhappy patients, negative patient outcomes and higher incidences of hospital readmissions.

In conclusion, experts believe it’s more than likely as the healthcare law moves forward with its patient-centered initiatives to improve the quality of care patients receive and reduce hospital readmission rates that hospital administrators will follow suit and begin implementing changes in their hospital to reduce patient nighttime care interruptions … and Let You Sleep!

← Intravenous Vitamin Therapy: Fab or Just Another Celebrity Fad? Dieting Can Become a Thing of Your Past →